On July 20th MRIA’s Emerging Leaders Task Force (ELTF) collaborated with the Toronto Chapter to present for the first time a storytelling event, In.Sight: Inspiring through Storytelling. Five storytellers took turns sharing their life and work experiences with a full house of experts, young professionals, and students. Their range of insights revealed the ingenuity of the marketing research profession and its limitless possibilities to innovate and inspire.

Throughout the night, it was evident how important storytelling is. Held in a small pub in downtown Toronto, the room was filled with people from all walks of life and at all different stages of their careers. There was a great energy in the room, with everyone looking forward to hearing their colleagues tell their tales. It was a night filled with laughter, comradery and inspiration. 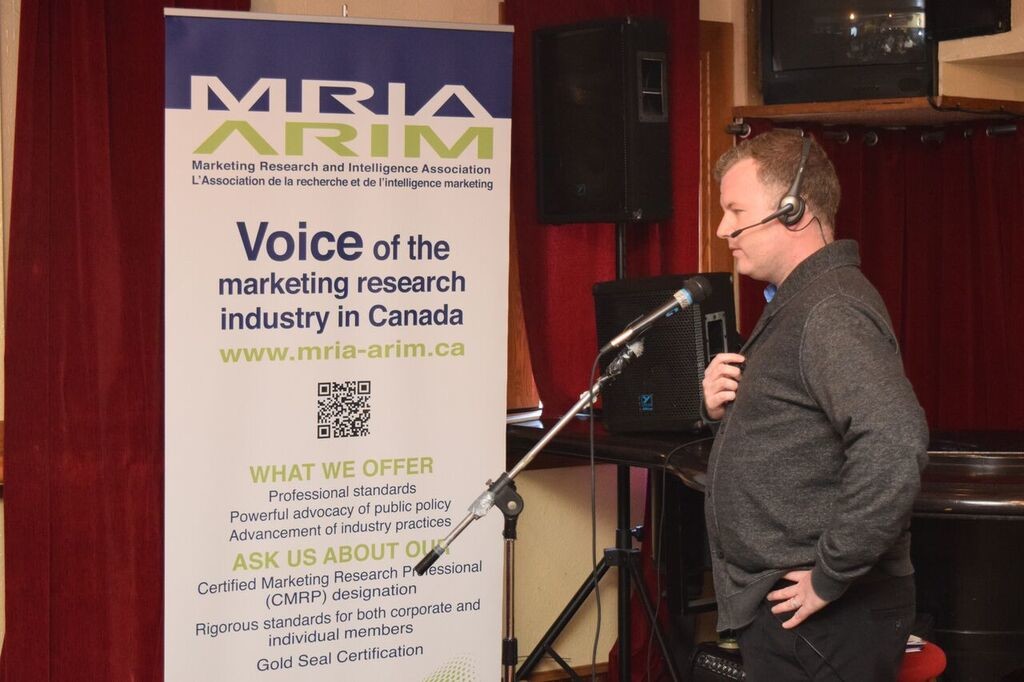 Shane Turner on the “telephone”

The evening started with the adventures of Shane Turner from Research Now. Shane roused an audience with episodic re-enactment of the early days of his career earning $6.85 an hour at a call centre in the 1980s. He chronicled his experiences with clients and suppliers in the call centre industry, learning patience, people skills and best practices, which shaped him into the fierce advocate of respondent experience he is today. Shane urged his colleagues to take one key lesson away from his story; “Respondent experience matters most!” 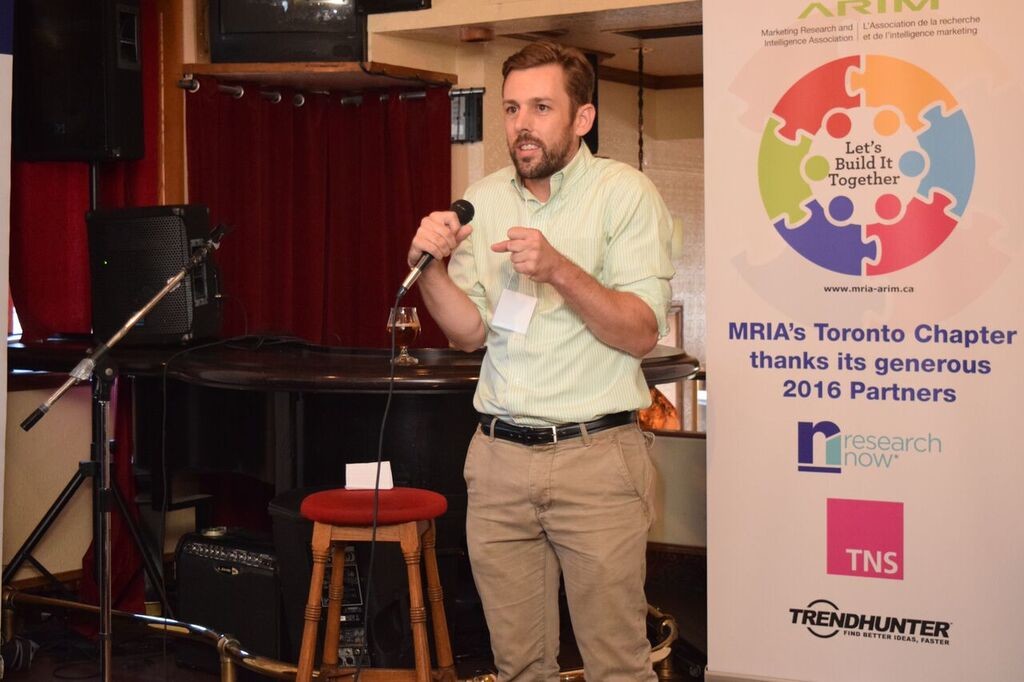 Next to take the stage was Alex Theus from Phoenix Strategic Perspectives.  Alex talked about his time as a struggling research analyst at a four-person start-up in Ottawa, serving federal government clients with limited data infrastructure. Learning new skills helped him look at his job in a different way, and broke the tedium of manually making banner data tables in the absence of sophisticated, expensive technologies like Wincross. A self-confessed “arts guy” with no programming degrees or skills, Alex took to the internet to find open-source solutions and to train himself in web-scraping, Python and using for-loops. He was interested in social media research and confronted with puzzles like, “Is a list of tweets comparable to a set of survey questions?” Persistent, he Googled his way to coding enlightenment and attended programming data meet-ups. He envisioned a better way to pull banner tables from SPSS and managed to use his passion for social media and drive to learn to automate what was otherwise a monotonous work- day. Automation was addicting, and soon Alex found ways to automate not only SPSS banner tables, but Power Point slide decks too. For Alex, following his curiosity and having the confidence in learning a new skill were valuable career lessons. 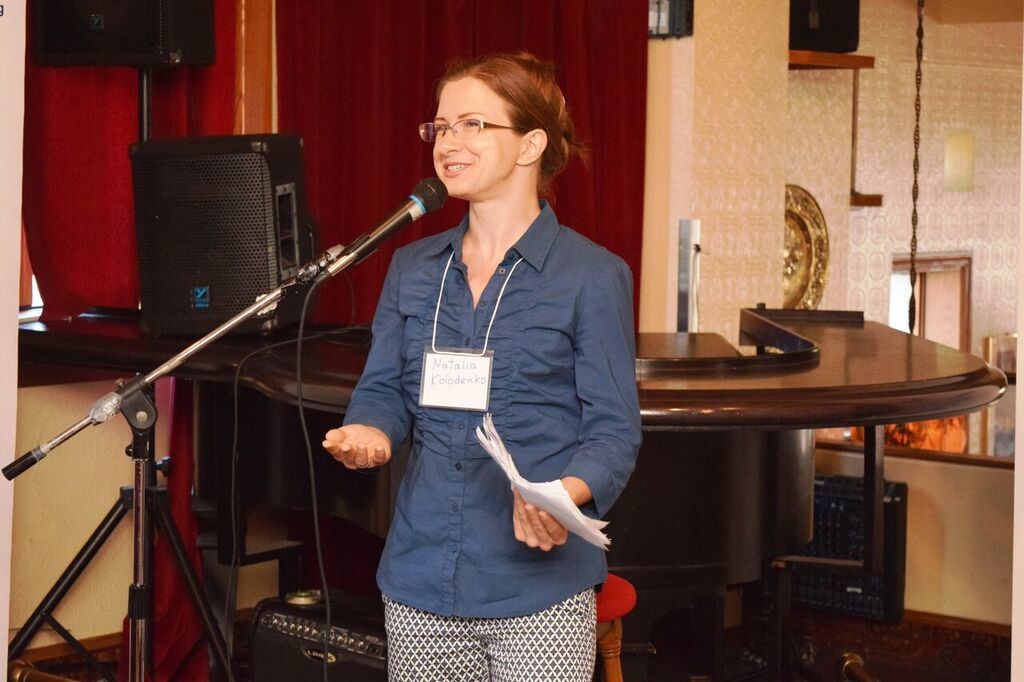 Natalia Kolodenko from Environics Research Group was next to take the spotlight. As a young girl in Kiev, Ukraine, she maintained a steady diet of detective novels with dreams of becoming a private investigator. But growing up she discovered that sometimes life gets in the way of your dreams: “There were no training schools for private detectives!” she exclaimed. Instead, she decided to help human beings as a sociologist, but found the job market for that field limited as well. Her brilliant investigative mind presented her with two career options: political technology or marketing. With no great love for the frequent corruption of the political world, she took the quick leap to marketing, and now solves marketing research mysteries for a living. Channeling Sherlock Holmes, she took the crowd through the Case of the Disappearing Shampoo Sales. Imagine a shampoo company that had invested millions of dollars in a marketing campaign and wasn’t sure why its sales had tanked – “Who had killed the sales?” asked Natalia. Employing the deft skills of a crime scene investigator, an analytical toolbox, and a heavy lineup of suspects, Private Eye Kolodenko zeroed in on the culprit. To get to the truth, she said, we must never torture respondents but could always torture data: Using such techniques as Discriminant Analysis, Clusters, Factors, and Correlation, the answers emerge. True to the old saying of, “If you torture the data long enough, it will confess to everything,” she showed how market researchers can solve the “crime” of declining sales.  Natalia nailed the “murderer”– the shampoo manufacturer’s inadequate pricing strategy. This was a story of her dreams come true. Natalia urged the audience to reflect on their childhood dreams, and spot some similarities with their jobs today. 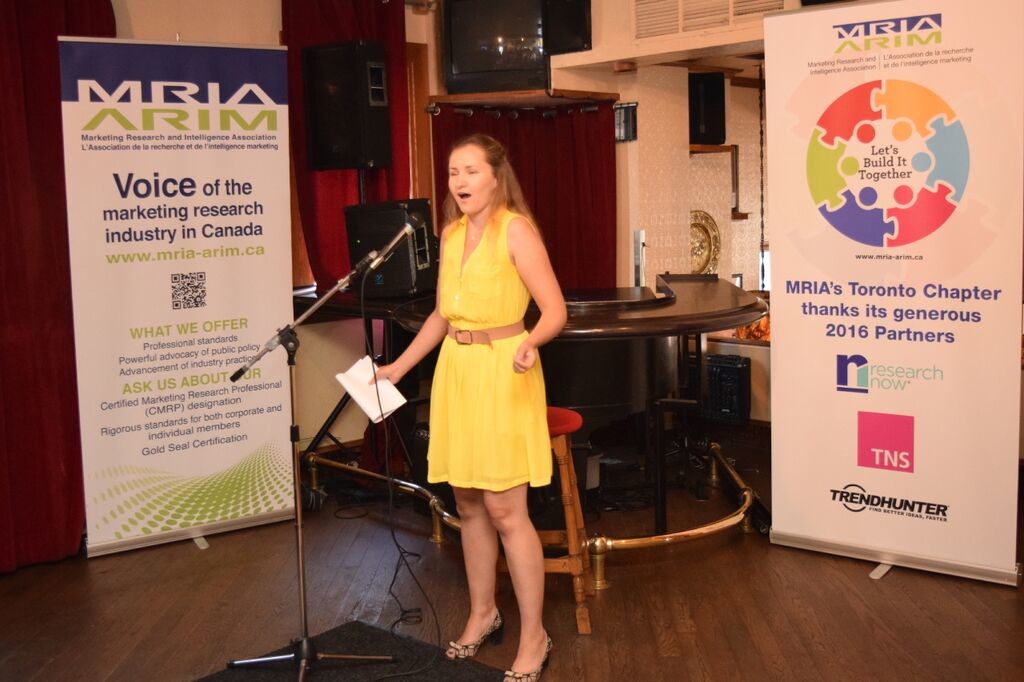 With the case solved, Ksenia Bichek from Environics Research Group was next up to the mic. Born in Russia, Ksenia, always had a fascination with Canada.  It began in elementary school geography classes with her admiration for the great lakes of this country. Her love of lakes would draw her to Canada years later when Ksenia decided she wanted to make a change, moving not just to a new city or country, but a whole new continent. Her admittedly unusual choice of Barrie, Ontario for such a big move left her assuring many people she wasn’t a spy – it wasn’t state secrets, but marketing research secrets she was interested in learning, having enrolled in the Research Analyst Program (RAP) in Georgian College in Barrie. Her story too was a tale of life interfering with the best laid plans. Just before school began, Ksenia broke her right foot, forcing her to face a year full of anticipated challenges that brought in new friendships, but also new levels of responsibility, culminating with a major project that would lead to her first job in the industry. It was a story of triumphant victory in light of unexpected challenges. 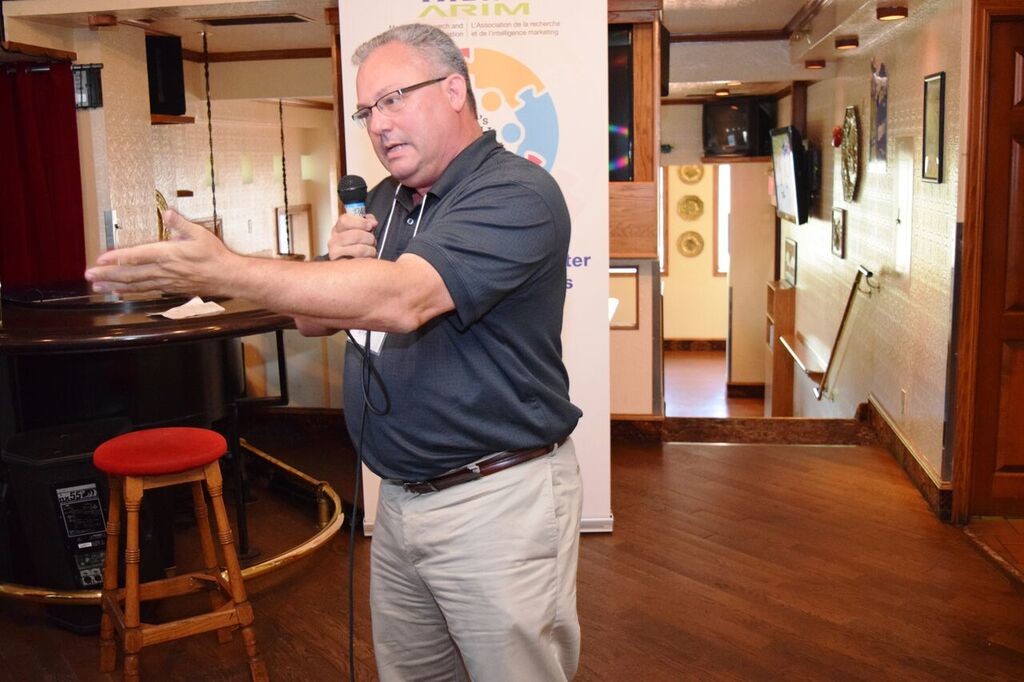 The final chapter of the evening was told by Chris Thorne at GfK. Chris’s story, “The Sign”, was a nod to all the preceding speakers. “You will find their stories in mine,” he warned, before encapsulating his 20-years of service in ten minutes. A business veteran in virtually every industry with stories from the trenches, he began from a time when surveying “in the field” was a literal expression. He started as a business consultant, and educator at the University of Guelph. Market research has come a long way from 1988, he assured everyone, hinting at the advanced technologies that have saturated the marketplace. He addressed the lifecycle of a story, from early struggles to the A-HA moments. He spoke about testing endurance, and building character in stories to break barriers with audiences: clientele, suppliers and respondents. Chris’s most valuable lesson was: character is what separates a story from a PowerPoint presentation. 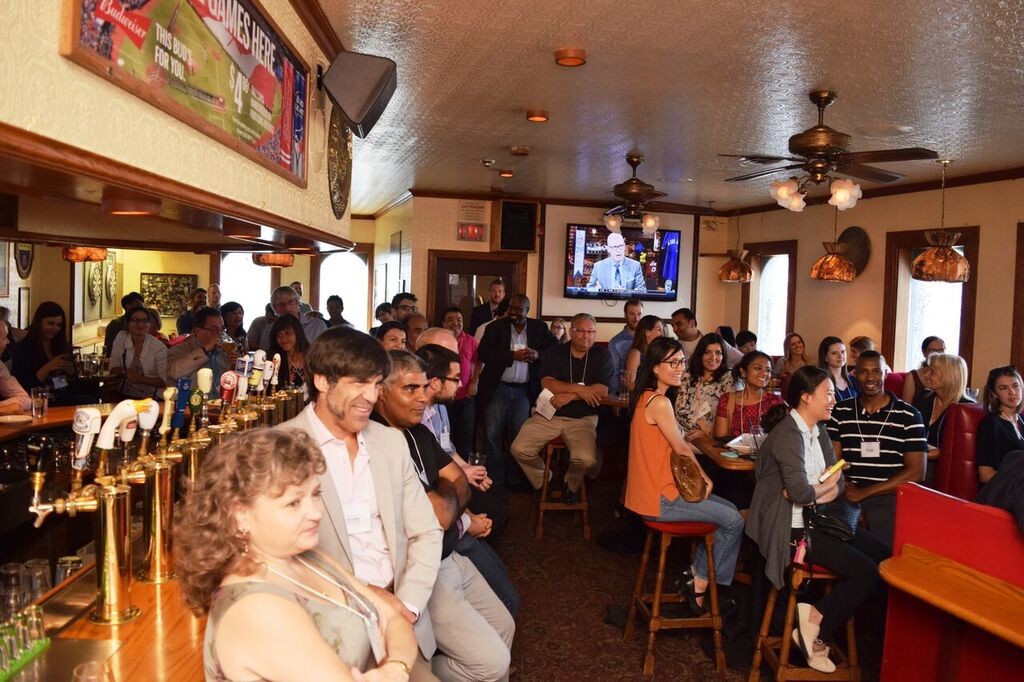 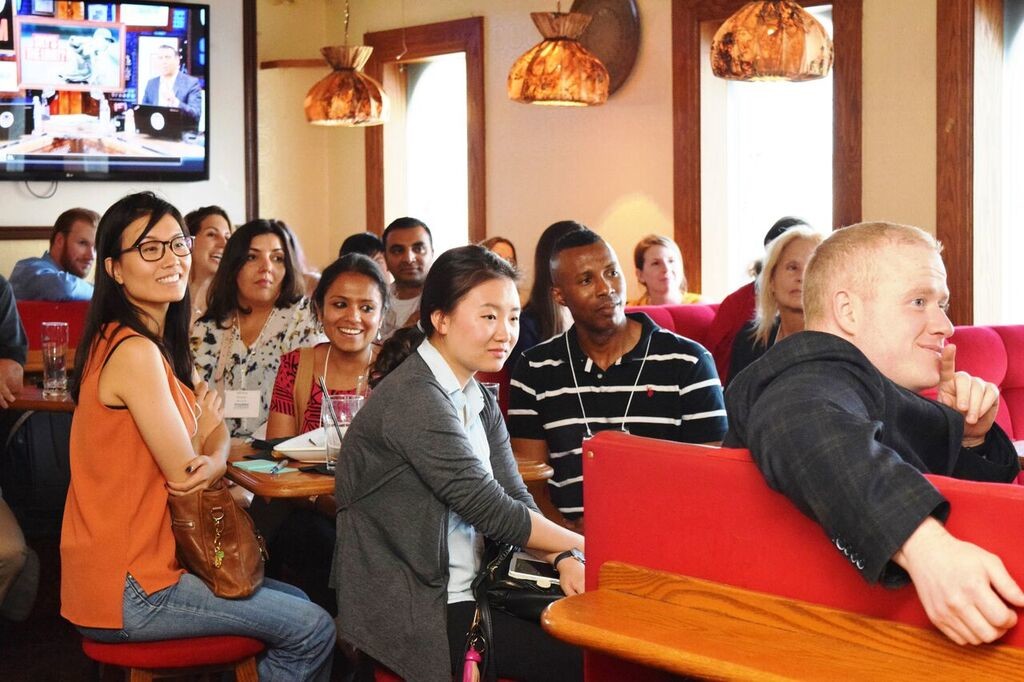 Throughout the night, the second floor at Paupers Pub was filled with applause, laughter and admiration for the five brave storytellers who had wrestled with narrative arc and storytelling to extract high business value in Canada’s marketplace.  The ELTF and the Toronto Chapter of the MRIA would like to thank once again all those who participated and made In.Sight: Inspiring through Storytelling such a great success.

All photos taken by Shishir Handa.

This also post appeared in MRIA Pulse and the Emerging Leaders Blog.

View all posts by Generation1.ca